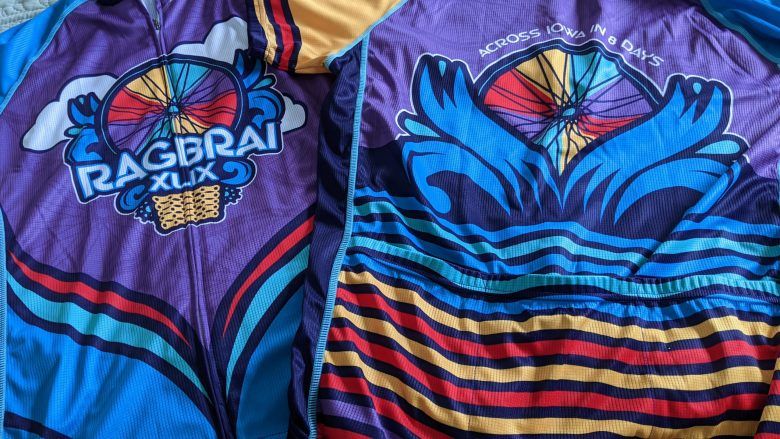 What does one need to go on a week-long bicycle tour?

We are finding out! And, you might be surprised!

Since the bicycle tour is RAGBRAI, we know they carry our stuff for us. Or, in our case, it will be on the bus that belongs to the local bicycling group.

The local bicycling group also provides transportation to the starting point, SAG support during the ride, overnight hosts (front yards for camping and access to bathroom/shower) and transportation home after the ride. How great is that!

RAGBRAI and the local bicycling club have provided lists of recommended items.

Let’s start with the basics.

We’re just using our ‘normal’ bikes. We have done a lot of bicycling over the years and have bikes that will do well with this bike tour.

Ben has a cross bike. He put on smooth tires for this road adventure.

The bikes go on top of the bus when traveling to the starting point, and when returning home after the ride.

We also bought a trunk(!) for Ben’s bike a couple of months ago. This replaces a much smaller bag we had for tools. The trunk will give us plenty of room to carry bars, sunscreen, tools, rain gear, and whatever else we deem necessary.

I already had a speedometer/odometer for my bike. Ben purchased a bicycle computer that shows him the same for his bike, plus a lot more.

This lets us know how many miles we’ve ridden, how fast (or slow) we are going, and current time.

Yes, we got the official RAGBRAI 2022 jerseys. In addition to these, we are taking 2-3 additional bicycle jerseys and 2-3 pairs of shorts.

We anticipate washing our shorts as needed throughout the week. For some of you, you will remember that we are experts at hand-washing our laundry from our time in Mexico!

Tubs are required for us to travel on the bus. The organization that owns the bus has been doing this for over 20 years. They know what works and what doesn’t work when transporting and supporting bicyclists across the state of Iowa.

Tubs work best for packing. Each person is allocated 2 tubs to put all their ‘stuff’ in for the week. This includes clothes toiletries, all the items listed below (except for tent and a case of gatorade), and whatever else we need for the week.

Since we are going with a local group, one of the perks of taking the bus is that the bus driver will set up our tents for us! How cool is that! Especially after riding bike 60+ miles. It will be great to ride into camp and have our tent already set up!

However, in order to take advantage of this, they required an easy pop-up style tent. So, we got one!

It simply pops up when unpacked. It takes a bit more when packing it up in the morning, but still can be done within a couple of minutes.

Here’s proof. Setting up the tent in less than a minute!

I didn’t know such a thing existed.

However, from what we hear, you don’t want to leave home without it! — if you’re going to RAGBRAI.

Apparently, you put it on the chamois inside your bike shorts.

We are taking advantage of the Dewalt batteries Ben has for his many tools. We purchased a USB charger that plugs into the battery. We can then plugin our phones, bike lights, kindles, and anything else that can be charged with a USB cord. We anticipate two of these batteries will last for the week.

This is another recommendation from our local bicycling club. The last week of July in Iowa is not known for cool nights. Staying in a tent can be rather warm. We purchased a fan that runs via a USB cord (using the USB Charger above) to keep the air moving in our tent.

Not to mention, that maybe this will also help to keep the mosquitoes out of our tent!

Another requirement for the bus – every bicyclist is to bring a case of gatorade, water, or similar drink. Water and drinks that replenish electrolytes are so important on a bike tour like this.

We found out recently that we really like this drink after our rides.

This is our favorite brand of energy bars.

They are not dry. They easily digest. And, they are good!

They have a variety of flavors – including nut flavors, fruit flavors, or a combination.

Plus they only have a few, yet nutritious ingredients.

These are powder pills we put in our water when riding. This helps replenish our electrolytes, keeping us energized for the ride – although I’m not sure I will be saying I feel energized after riding 60+ miles.

We found we don’t like to eat much while riding, yet we need to keep our energy up. How can you not enjoy a ‘Chocolate Outrage’!?

If you are a Baughman, you drink coffee. (Somehow, Carma still gets to be a Baughman!)

We haven’t found a chai drink to take along, but we did find this for Ben to have his morning coffee. Plus, some extra collagen protein!

Yes, shower caps! This was another recommendation from a friend in the local bicycling club.

It goes over our bicycling helmets when it’s raining!

Ben’s rain gear has a hood, so he won’t be needing a shower cap. However, Carma’s rain gear doesn’t.

We’ll be sure to get a picture if the shower cap goes on!

Carma is averse to sun on her face.

She found this visor that will fit inside her helmet and has a large enough visor to keep the sun off her entire face.

For those that know Ben, he cramps. A lot.

We are hoping that not only does this help eliminate his leg muscles from cramping, but also reduces sore muscles over the week-long ride.

This is another one of those “you don’t want to leave home without it” – if you are in Iowa. This is a locally made bug spray that works well for Carma.